The hardcover Robotika collection is not only listed at Amazon.com, but it also has a great editorial review printed from Publishers Weekly. At the moment it is occupying 280,000 ranking in popularity/sales...I am sure that is a good start.

Posted by Alex Sheikman at 8:15 AM No comments:

I was never very good at drawing fight scenes with a bunch of people in them. I like to focus on a little part of a scene and exaggerate that, instead of focusing on everything. However, with the second series I am trying to push myself a bit so I am trying some different things...and it's turning out to be lots of fun. Here is a sketch of the background for one of the panels (Niko will be calmly sitting and eating his lunch in the foreground).

I think this is pretty primative depiction of a bar brawl: there is not much depth to the scene, all the figures are on the same plane, and there is not much interaction between the fighters (everybody is pretty much split up into pairs), but this was fun and I am looking forward to expanding on this idea. 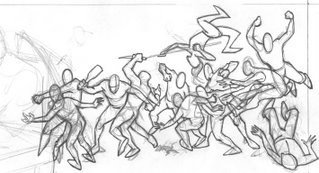 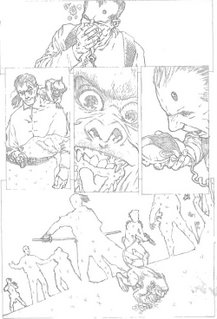 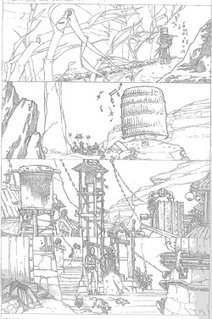