Featured over at The Marquis blog

A picture that I drew got featured over at Guy Davis' "THE MARQUIS".

If anyone can make it please stop by and visit me at WonderCon this weekend in San Francisco. I will be sharing a table with Matt Maxwell under the listing of "Highway 62" in the small publisher area. I'll have sketchbooks, "Robotika: For A Few Rubles More" collections, and whatever else I might think of to bring up :) 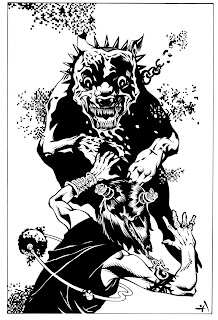 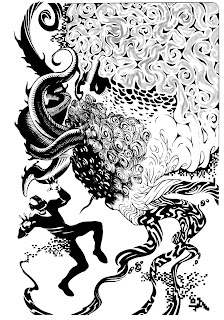 These were done as icons for a role playing game: 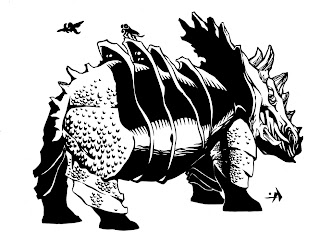 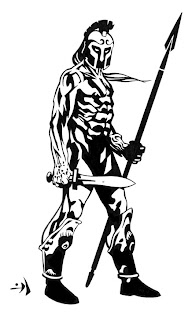 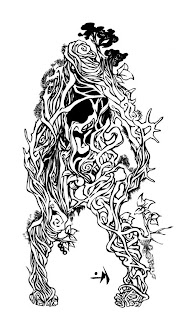 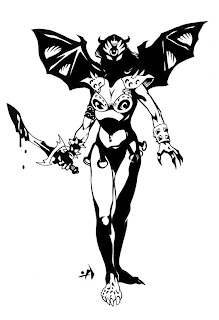 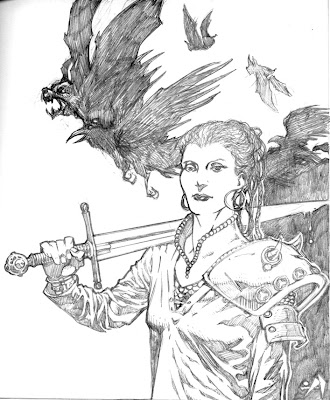 I have started a new sketchbook. This will hopefully turn into "One-a-day, Volume 2"...but since the first sketchbook evolved into something completely different than what I expected it to be...who knows what this will become :)

My amazon pre-order list has grown huge...thankfully amazon does not charge until they ship the books. Here is what I have on order:

The Art of Neal Adams
The Art of Steranko
Both books will be published by Vanguard and they did a pretty good job with the Michael Golden book a few years back, so I have high hope for that.

Rip Kirby Volume 2 HC
I really liked the first volume (muddy reproductions and all :)). Truly a beautiful approach to comics and storytelling.

Tony Harris: Art and Skullduggery
I have always been a fan of Tony Harris' art, ever since his run on Starman. Recently I have not been as excited about his work, although he is more popular than ever with the ExMachina series, but I loved his "RoundEye" story from a few years back and since "RoundEye" is featured on the cover I hope to see more of that inside.

Wednesday Comics
The Wednesday comic series printed on nice paper in their original size. Ryan Sook, Brian Stelfreeze, Lee Bermejo....what's not to like?

Cover Run: The DC Comics Art of Adam Hughes (Adam Hughes Cover to Cover)
I could never afford to buy all of the comics with his individual covers, so here is my chance to buy a bunch :)

X-9: Secret Agent Corrigan Volume 1
I already mentioned that in an earlier post...I am really looking forward to this.

Also on my list are a few books that already came out, but I have not geared up to buy yet:
Sinister House of Secrets- contains a reprint of Alex Toth's 36 page story "Bride of the Falcon" from 1972
House of Mystery Volume 1- contains 5 short Alex Toth story reprints for a total of 54 pages of beautiful black and white art.
Posted by Alex Sheikman at 5:10 PM 5 comments:

A warning: this will not be pretty. I know of some artists whose lay-outs and sketches can be considred the work of art...not mine.

To answer an earlier question I wanted to post something that shows how I work out my storytelling for panel-to-panel pages.

Above are my 3 sketches for the last page of a short story "The Bronze Horseman" (those who have the published version, will note that the final version of the page is actually a bit different). The first 2 are simply me moving a pencil or a pen around trying to figure out what will be on the page. What I need to show to move the story along? Is is going to be a splash page? How to arrange panels to make it interesting? What angles to use in the panels?

Once I get to the point where I think the story is served, the compositions are interesting, the storytelling is clear, and there is something interesting to draw, I take out a marker and spot my blacks. This I do so that even though the lay-outs are very tiny, with the solid black shapes drawn I should be able to tell what is going on on the page. If after spotting the blacks the page looks like an unreadable mess...I start again.

That is my approach to it...if any other artists are reading this and would like to comment on their methods, I would love to hear it :)

Amazon this week....it turns out that there was some sort of pricing problem between Diamond and Amazon (something got lost in the process of transfering information from one to another) and all the books carried by Diamond got priced at $15 (even the books that should be going at $40). This was especially true of the "coming" items. Tons of people placed orders...and now there is a mess. Some orders will stand, some orders got canceled. You will note, now you can place an advanced order for Robotika, but you can be notified by e-mail when it arrives. This of course is a bit of a bummer and has regretfully happened a week before Robotika 2 arrives :(
Posted by Alex Sheikman at 6:41 AM 8 comments: 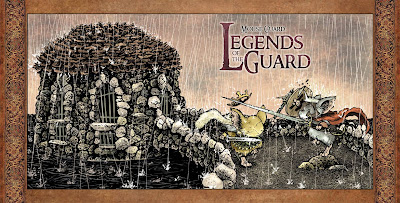 David made a comment about the earlier post, reminding me that when I called to see if I can be part of the "Legends" project, he already had my name on the list of possible contributors, but the project was still in the early stages of development so it was too early to start calling people...but inspiration struck and I am very glad I called ahead because that gave me an opportunity to spend a little bit more time on my story, by working it in a "classic" one-step-at-a-time fashion and not worry about the deadline. This in it's own way is interesting, because I usually do not like to call, or otherwise bother, people about jobs. I am more comfortable just sitting in my room drawing and hoping that somehow the jobs will come in...I mostly make a fool out of myself when I talk to editors. But in this case, I felt very comfortable talking to David (and Julia) and I also felt that I was not bothering him in anyway, if he wanted to have me be part of the project he would tell me so, if not, he would be just as straight with me and tell me "no".

Anyway...my first step was to lay-out the story that I had in my head to figure out exactly how many pages I needed to tell it right. This is critical in an anthology situation because everybody needs to know how long each story is and then try to figure out how to compose each issue.

As I mentioned in an earlier post, I had a very clear idea what I wanted to do. This was actually kind of surprising, because (for the first time in my comic book adventures) I was writing about a universe not of my own creation. I believe there were a few reasons that contributed to this clear "vision". First of all, David and I talked a few times at conventions about stories and fairy tales and myths and how all the different lore relates to his ideas about Mouse Guard as a story. Secondly, I did read all of the Mouse Guard published material (a few times), so I felt that on the illustration side of things I had a pretty good idea of how I would handle the rendering. And lastly, I had a story that I have been wanting to do for over a year, but I just could not picture how to approach it...but putting it into the Mouse Guard universe made all sorts of sense and "bam" I had the panels dancing in front of my eyes.

So I sat down and did lay-out for the story. I drew a grid of 2x3 inch rectangles in my sketchbook (6 per page) and filled them up with stick figures scribbling notes and parts of dialogue either in the panels or on the borders. If things did not work right away, I would erase and keep penciling until I got the pages looking like I wanted them to. After I got the story down, I got a pen and spotted the blacks to make sure the storytelling flowed right.

When I was done I scanned the sketchbook pages and e-mailed the layouts to David. This was so early in the project that the editor has not been brought on board yet and David has agreed to act as my editor for the time being. Over the phone we went over the layouts and this is where things started getting fun. David totally understood what I was trying to do with the story and the storytelling. Based on that he suggested two scenes in which the certain angles did not work right. The first was an establishing shot that I laid out in a very confusing way (it looked fine when I was laying it out, but after talking to David I could see that it would not work), and the second that the panel on the last page and David suggested changing that in a way that would highlight the ending. I scribbled both changes into the questionable panels as we were talking and when I got off the phone I was even more excited about doing the story...here was something I could really sink my teeth into and because the story and storytelling were done, I just had to focus on the art. It's all about problem solving and this is the sweet spot that I love being in.

But it was going to get even better, because now I had to figure out how to design characters that lived in Mouse Guard Legends universe!

Next: Character design and pencils

P.S. Amazon just announced that they are taking pre-orders for a collection of reprints of Archie Goodwin/ Al Williamson's "Secret Agent X-9" Volume 1 (1967-1969). I am becoming a big Al Willaimson fan based on the work that has been recently reprinted (like the great Flash Gordon strips that he did) and I am very much looking forward to seeing this X-9 book.
Posted by Alex Sheikman at 6:27 AM 7 comments:

"Robotika: For A Few Rubles More" 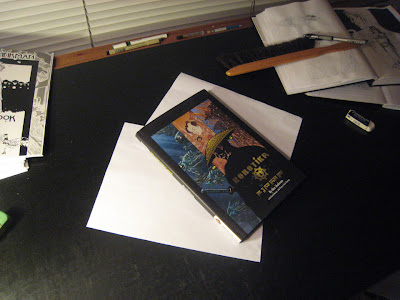 Today I have received a copy of the collection from the publisher. In a week or so, it will be at Amazon and in the comic book stores. It took much longer than expected to get the second series published and collected in this edition. The publisher went through a reorganization after the first issue got released and there was a real possibility that the book was never going to come out...but here it is :)
Posted by Alex Sheikman at 9:43 PM 3 comments:

I added a niffty PayPal button to make it easier to order the new sketchbook (just take a look at the upper right hand corner!), and here are a number of the sketchbook sketches that I recently done:

Posted by Alex Sheikman at 9:10 PM No comments: