Mark put together this ad for Diamond Previews that will solicit Robotika #3 and Mouse Guard #2. I loved how he worked in the vertical title and the credits for me and Joel. 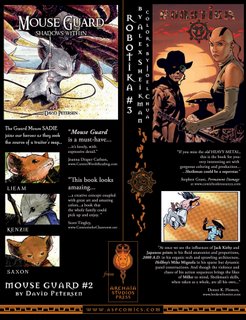 Posted by Alex Sheikman at 1:34 PM No comments:

Got another very thorough review at:

I am loving the fact that some folks really take their time to read the book and think about it. This is exactly why I did it in the first place!!
Posted by Alex Sheikman at 10:40 AM No comments:

Alex Ness was kind enough to include Robotika in his "wrap-up" for 2005. I think that is pretty awesome:

Another awesome news is that Ryan's "X-Factor" #1 is sold out and is going in for a second printing! I read the issue a few weeks back and I thought that the story and the art were right on...the cover alone is "to die for"!
Posted by Alex Sheikman at 6:47 AM No comments:

Today I got a link to another new review of the first issue:

Yesterday I started inking a drawing and was reminded that if I don't ink for a few weeks I "loose" it. I am trying to create an econimic line with certain vigor to it...hard to do when my skills are reduced to a baby level.
Posted by Alex Sheikman at 6:57 AM No comments:

and here is another:

This is an earlier review of Robotika photocopies that I sent it before the book was colored/published. It is pretty much the same as the full review in #222, but I wanted to put this one up to have a complete listing of all the articles:

Posted by Alex Sheikman at 8:24 AM No comments:

Reviews (II) and a drawing

I just read a two very nice reviews for the first issue. Here is one:


and here is another:


I also just finished another idea for a Robotika drawing. I am trying to capture all the elements of the storyline in one illustration. 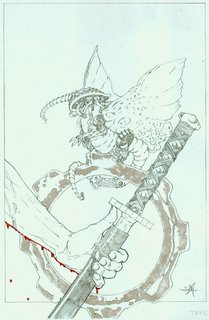 Here are two reviews of the first issue:

These are very kind reviews, I hope they will inspire some folks to give the book a look.
Posted by Alex Sheikman at 7:57 AM No comments:

After the release of the first issue I have recieved a letter from someone who purchased Robotika and after reading it decided to write in and share his impression of the issue. It was a very articulate letter that contained some very kind words about the art work, storytelling, and story ideas...but one thing stood out as a "sore thumb": Cherokee Geisha's vertical text. In his opinion, the text slowed down the reading experience and made him leave the story.

I was thrilled to get the letter. It was awesome to hear from someone who read the book and felt inspired to write about it. That was very much appreciated. The vertical text is an interesting point and I wanted to say a few words about it.

English is my second language and I still remember the experience of trying to communicate with someone and how frustrating it was when I could not. I also remember how rewarding it was when finally I started "getting it", a whole new world opened up for me. Since than I have developed a huge appreciation of English (and it's American "cousin") as a beautiful language.

This was my first opportunity to verbalize my thoughts about the matter (other than talking to friends or to Mark about it), and I hope readers will understand what I am trying to do.
Posted by Alex Sheikman at 8:00 AM No comments:

There is a new interview and a preview for Robotika #2 at Broken Frontier:

This was one the first time "in print" that I was able to thank Barbara, Leif, and Ryan for all the support and care that they have given me and Robotika.
Posted by Alex Sheikman at 7:47 AM No comments:

Robotika #1 went on sale last week on the East coast and this week it will be on sale through out the rest of the country. I just got the promotional copies that I need to sign (and get Ryan, who contributed the cover to issue #1, to co-sign)...it is pretty cool to see the book printed...in fact it is pretty amazing. 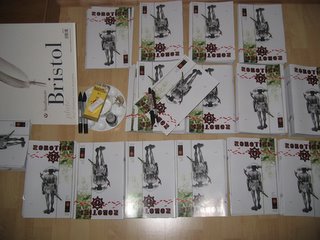 Posted by Alex Sheikman at 7:27 AM No comments:

There are two more interviews up about Robotika. One at ComicReaders.com:


and another one at Jazma:


There is also a write-up based on some questions that I answered at Comicon.com:

Also the second issue of Robotika (!) is solicited through Diamond Previews this month. Robotika #2 got a "Certified Cool" sticker with a half-page color ad and a write-up on page 222.

The same Previews issue is also soliciting another new title by Archaia Studios Press, "Mouse Guard" #1 by David Peterson. "Mouse Guard" got a Featured Item description on page 205, a two page interview with David on pages 220-221, and a write-up on page 223. The book looks beautiful and I can't wait to read it.
Posted by Alex Sheikman at 8:45 PM No comments: