Eisners...how does it work for anthologies?

I have just learned that "Mouse Guard: Legends of the Guard" anthology won a 2011 Eisner. Which is pretty cool, because I contributed (snuck) a story to it... so does that mean I can now put "Eisner Award Winner*" next to my credits?

I will be hanging out at Hijinx on Saturday. There will be tons of 50 cent comics and cool guests celebrating the sale. I am going to bring my dark crystal pages and whatever else I can find :)
Posted by Alex Sheikman at 11:00 AM No comments:

More designs for the graphic novel. 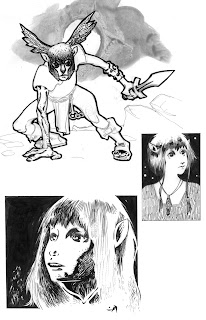 Posted by Alex Sheikman at 6:10 PM No comments:

Damaggio only worked in comics for a few years before moving on to work as a storyboard artist and hardly anyone remembers him, but the guy was an awesome storyteller. He drew about a year worth of Green Arrow monthlies and did a 4 issue "Batman vs Predator III" miniseries that are just wonderful to read. He also did a few short stories about the DC Universe. His artwork is somewhere in between Alex Toth's "simplification" and Al Williamson's "photo realism" and works best when he is inking himself (in this story he is penciling, inking, and coloring). This one is about the duality of Bruce Wayne and Batman. Clever and well told with a gentle twist at the end. 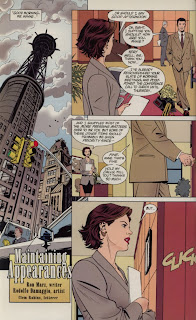 Another Damaggio gem. A story about Wonder Girl talking to Nightwing as they go for a coffee in their civilian identities. This is an excellent story with wonderful characterization, action, humor...AND wonderful Damaggio storytelling (again he pencils, inks, and colors). 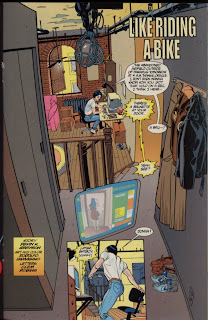 "The Couch" Vito Delsante and Dan Haspiel from Batman Adventures

Continuing with the Batman theme, here is a story that I think might be one of the best stories that plays with the Batman myth. In a way, like "Maintaining Appearances" this only works because of decades of established Batman continuity, but it is so clever and uses the comic book medium so well... it shows the pathos and the humor all at the same time which is one of the most unique features of comics. 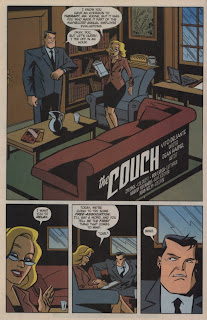 The Art of Short Story: Part I

A whole discussion can be had about how the policies of reprinting individual issues in TPB collections have changed how the stories are structured in each 22-24 page book. Thinking about that I started remembering certain short stories that I love, but I believe would not find a place in the current publishing environment...they just would not fit into any particular TPB.

Lets see how many of these sound familiar and I would love to hear your favorites (as long as they are 12 pages or less). By the way, I am not listing them in any sort of order of significance, they are all lovely in their own ways AND I feel that each one uses the comic medium to a perfection. So here I go:

When I saw this, a bomb went off in my head. At that time I have heard about Barry Smith and the guy who worked at the comic shop seemed excited about Barry Smith's "return to comics", but I did not expect this. Reading this story is like having a vivid dream...and the art is fantastic. 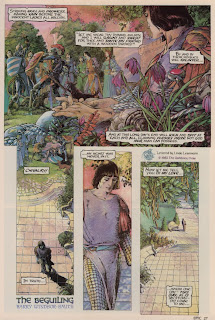 Unlike "Beguiling", this story was published without any fanfare. Just a short story in a silly holiday special that was PENCILED and INKED and COLORED by MICHAEL GOLDEN. Totally "silent" (except for the sound effects) it is an artistic feast with a cute ending to it. 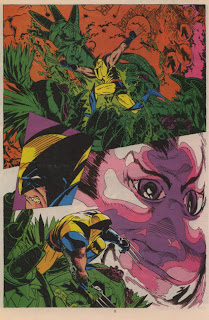 Here are a couple of images from my sketchbook. As I am working on the Dark Crystal pages, I am continuing to do test in my sketchbook trying to figure out better ways to draw the characters. 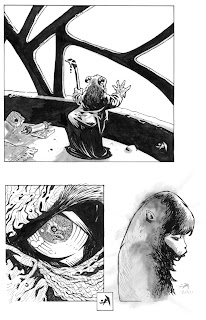 Posted by Alex Sheikman at 2:27 PM No comments:

I just finished reading "Doctor Strange: The Oath" by Brian Vaughan and Marcos Martin. This is the collection of their 5 issue mini series from 2007 and I can't believe I did not give it a try earlier. The story has a number of subplots, one of them being: "What if Doctor Strange could cure cancer through magic?". I found that particular thought fascinating, and I really enjoyed how the story did not take any easy "outs". It asked tough questions and gave answers that were believable and sounded true to the characters.

Wonderful interactions between everyone involved in the story were highlighted by very expressionistic art of Marcos Martin. He sort of has a cool style that is a cross between Steve Ditko and Paul Pope...and it really works great here!

To sum it up, this was the best Doctor Strange story I ever read.

In the mean time still working on "Dark Crystal". Got the script and the layouts done up to page 48...17 more pages and it's off to the printers.
Posted by Alex Sheikman at 8:44 PM 3 comments: