Continuing on the Lovecraft sort of theme :)

How can anyone resist illustrating E. R. Burroughs? I always think of Frazetta when I think of John Carter illustrations, but Richard Corben also did some of the illustrated book club editions in the 1970 and they are great.

I got interviewed by Bill Baker. It was a fun discussion and I got to post some of my recent sketches.

Also, over the weekend, I read Frank Miller's "DK2". It did not really capture me as much as the Dark Knight Return" did. It had some of the same elements like: comments on the media, comments on the current comic book field, nostalgia for old comics...all of which was high lighted by the type of line and color work used. Interestingly enough, the "hard boiled" part was missing and I thought this truly was something you could read as a Justice League story from the pre-Watchmen/Dark Knight days. Did anyone else here read it?
Posted by Alex Sheikman at 9:10 AM 9 comments:

The Russians are coming!

The second Robotika collection is coming :)

Yeah, the octopus at the end was my idea :) 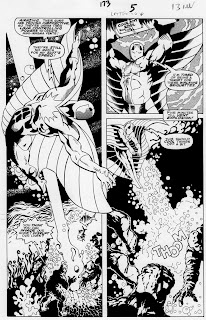 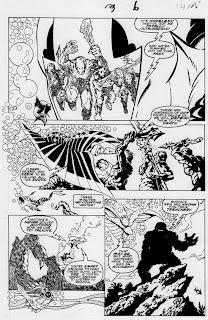 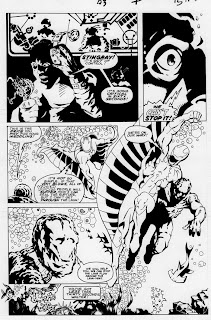 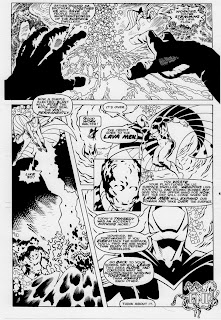 Here is the first 4 pages of a StingRay (an underwater character from the mid 70's that was first introduced in Marvel Two-In-One) that I did for Marvel Comics Presents: 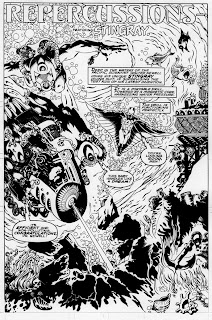 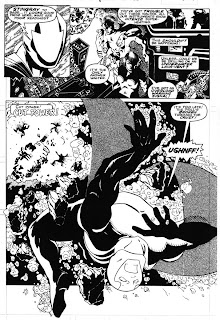 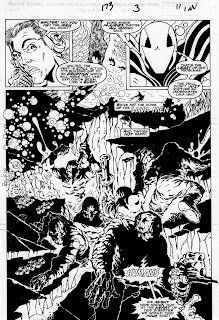 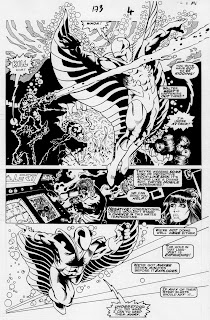 There is a lot of baggage associated with this 8 page story for me. It turned out to be my Waterloo, and by the time I saw the story in print I decided to quit comics...up until about a year ago I would have been embarrassed to show the pages, but now it all seems kind of funny.

I did the layouts/pencils/most of inking, the StingRay figures were inked by Mark McKenna who was also the guy who went out and got the job. Mariano Nicieza wrote the story (I believe he was related to Fabian Nicieza who was doing a lot of writing for Marvel at the time) and a lady with the last name Buscema did the colors...
Posted by Alex Sheikman at 2:32 PM 8 comments:

This was something that Leif Jones penciled (I think as a try out for the Xena books that Dark Horse was putting out...if Leif reads this I would love some enlightenment). Anyway I loved seeing the photocopies of the pencils and using some overlays I tried inking one of the figures and a portrait of Xena. I had a lot of fun at the time, but looking at it now it seems a bit heavy handed...again because I feel I used the wrong tools. 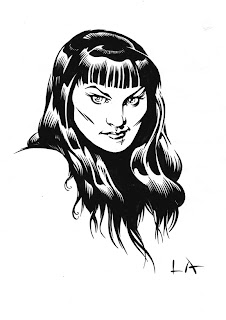 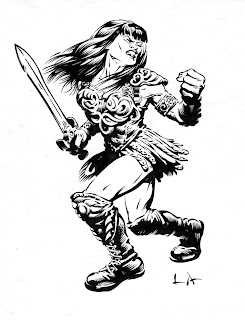 This illustration was done for a book of poetry by Alex Ness. I have been doing Robotika by this time for about a year or so and trying to do a single illustration felt weird...but it was fun!

Here is the conclusion to the story. I think with a tweak here and there it could have been something like an Eerie or a Creepy short: 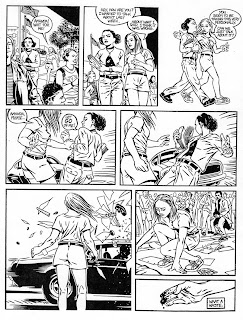 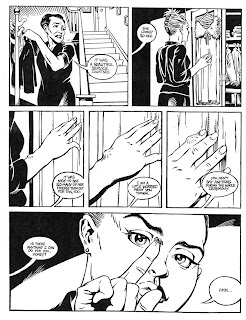 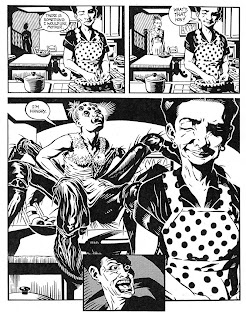 Around the time that this story was done, I was thinking of trying to be an inker. Funny enough this is the only panel-to-panel story I ever inked...not too good for someone who aspires to ink for a living. I found out that I just don't have the right head to be an inker. I can't really "read" what the penciler wants. To me it's all about what I am using at the moment. For this story I used a brush for just about everything (because I was practicing with the brush and felt very good about handling it) and looking at it now I think it's a real shame. This could have been so much better if I used a bit more variety of line.

I also remember talking to Leif about the story and I believe he was in talks with someone at Dark Horse about submitting samples for their Buffy comic book. He thought that drawing teenage girls in this story would be a perfect try-out to send to the editors. However, he told me, that by the time he was done with the story, he had his fill of drawing high school boppers and that was that.
Posted by Alex Sheikman at 8:50 AM 2 comments:

At one point, White Wolf Games, were printing short comic stories in front of same of their role playing books. I did a couple and Leif Jones did a couple (which are totally worth looking up just for the awesome art) and than Leif suggested that we should do one together. I thought that was a great idea and agreed right away. Leif penciled and I inked. I thought Leif did an outstanding job storytelling and I still believe that it is just a cool little horror story. Here is the fist 4 pages: 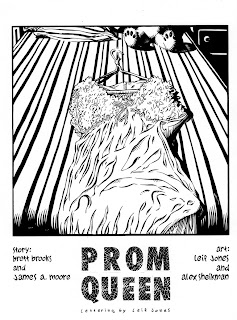 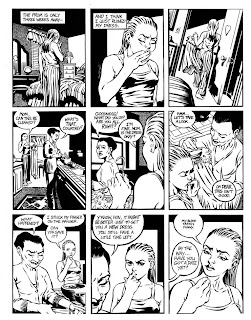 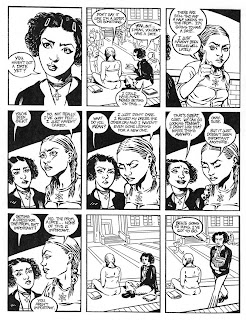 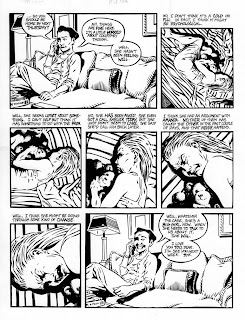 On Friday, the conclusion and some trivia about this short story :)
Posted by Alex Sheikman at 6:09 AM 3 comments:

-How are you feeling Dr. Stephen Strange?
-Just fine thank you. 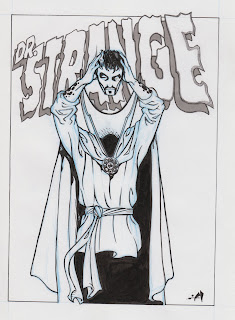 Placing a pre-order with amazon is so sweet. They don't charge until the books are printed and shipped. So I get to hit the "buy" button a few times and get it out of my system for free...of course there will be a time when I will have to pay for the books, but I'll stress about that later.

So in the last 6 months I have placed 4 books on my pre-order list:

Winterworld by Dixon and Zaffino.
The original 3 issue series "Winter World" knocked me out. Here was the guy whose art was pure energy and anger. It was not as "messy" as Salmons or Sienkiewicz, but it sure was not pretty. I loved it and when I heard that he and Dixon completed a sequel called "Sea Wolrd" I started waiting for it....15 years later (!!) IDW is reprinting "Winter World" together with never released "Sea World" in black and white. The shame of it is that Jorge Zaffino has passed away and even though his art will be "discovered" by a whole new generation of art fans, he won't know it.

Rocketeer by Dave Stevens.
A whole new collection by IDW collecting all Rocketeer stories re-colored by Laura Martin (the colorist who started Adam Hughes on his road of digital color). I have some of the original material, but not all of it and after reading last year's Dave Stevens book I can't wait to sit down and read this collection.

Rip Kirby by Alex Raymond.
I have no idea what this will look like, but I have seen some panels from "Rip Kirby" and I thought they were amazing. The only "Rip Kirby" reprints I could find on-line were Italian collections and they cost an arm and a leg to get shipped over here, so I passed and I hope this will be as good as what I have seen on the web.

And last (but not least) I placed an order for Robotika: For A Few Rubles More collection that is now listed on Amazon. Mostly I did this because "if you wish it, it will come true". Maybe if I place an order they will actually print the book (and also because it was in the 4,000,000th place...it is now somewhere in the 200,000th)
Posted by Alex Sheikman at 6:17 AM 22 comments: