There has been an interesting trend in comic art lately....forget fancy computer coloring, lets just try to reproduce the line artwork as close as we can to the original. This very much appeals to me, because I enjoy seeing how the artists approached the final stage of inking and I believe I always learn a lot from being able to see the technique used. Judging by the response that IDW is getting to their Artist's Editions, I am not the only one who is interested in seeing the artwork "up close and personal".

In the last few months there has been a lot of announcements for new books that fall into that general category. From IDW there are editions of work by Bernie Wrightson, Neal Adams, Dave Stevens, Walter Simonson, John Romita Sr.,Will Eisner, Wally Wood, Sergio Aragonez, David Mazzucchelli, and Joe Kubert (thanks Norm!). Fantagraphics announced artist centered collections for Jack Davis, Al Williamson, Wally Wood, and Harvey Kurtzman. Titan Books has just announced that it will produce an Artist Edition (AE) of Archie Goodwin/Walter Simonson's "Aliens" adaptation re-scanned from Simonson's original inked pages...there will in fact be two editions of the Alien AE. One edition to be sold at amazon and one that can only be ordered through Diamond (via a comic book store) that will contain a signed book plate by Simonson (for those interested in seeing more information about the two different editions, go and visit Alien: Illustrated Story facebook page).

I was thinking about how this trend just sort of sprung up out of nowhere...and realized it has actually been building up for a while and made an interesting connection.

I think the first books that I was aware of, that were re-shot from original artwork and were reproduced in black and white, were the books produced Russ Cochrane that reprinted the EC comics and later a set of books that reprinted Al Williamson's Star Wars newspaper strips. Both sets of books are pretty expensive now (they were originally published in 1970's) and I have only seen a few of them. My impression is that the line work is crisp and the paper quality is excellent, but it does not look like the original boards (in other words you can't see the white out or other imperfections, like coffee stains). The volumes were oversized, but they were not reproduced the same size as the originals, the images had to be reduced.

Later on, Wrightson started printing his Frankenstein portfolios in what appeared to be 1-to-1 proportions and when a friend of mine showed me the plates I was blown away by the reproduction. I remember thinking that this was incredible stuff.

The next big development happened 15 years later Insight Studios published "Al Williamson's Adventures", all the pages re-shot from the originals and printed with technology that has seen a lot of improvement.

Shortly after that IDW announced their first Artist Edition of Dave Stevens Rocketeer, which was scanned in from originals and printed full size on thick paper so it felt like holding original pages (and by the way, I am not suggesting that IDW copied any concepts here, they were building up to the Artist Editions for a couple of years by putting out nicer and nicer books...just witness the series of Rocketeer albums and their "growth" in both physical size and quality of reproduction and their reprints of Kevin Nowlan's "Grimwoods Daughter" and Jorge Zaffino's "Winter World" (both printed comic book size, but re-scanned from originals or original stats)).

What I found interesting about this is that Al Williamson's name has been closely related to all of this. From the first Ross Cochrane's reprints to the upcoming Fantagraphic books, Al Williamson's work is always getting the recognition it deserves. It has also been stated that Al Williamson loved art and has tried to keep most of his originals, which now is allowing publishers to go and re-scan the work without having to track it down. My understanding, from reading a bunch of on-line articles, is that Walter Simonson has also been able to hold on to much of his artwork, which might mean there will be more Simonson Artist Editions available as well.

I never thought I would see this...Wrightson...Adams...Artist Editions!!

This might be old news, because the solicitations were made last month, but because I don't get Previews, this was news to me. WOW! To think that it will be now possible to get something that is that close to an original of the Muck Monster!!!
What batch of pages can be next? Wrightson's Black Cat? Golden's short Nam stories? Kevin Nowlan's Johnny B. Quick? Sandy Plunkett's Black Panther? Jim Steranko's Tower of Shadows? CORBEN!?!?!? 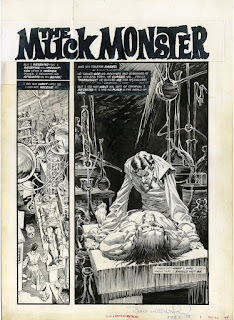 Neal Adams’ Thrill Kill: Artist’s Edition Portfolio
Neal Adams redefined the look of comics in the 1970s. His groundbreaking dynamic storytelling, coupled with a sense of realism that was never before seen in mainstream comics, has made Adams one of the most influential artists of the last 50 years. He was responsible for what many consider to be the definitive version of Batman, as well as being the co-creator of one of the Caped Crusader’s greatest villains: Ras Al Ghul. He has produced near legendary runs on Green Lantern, Deadman (in Strange Adventures), the Avengers, the X-Men and many more. Now IDW is pleased to present one of Neal's outstanding stories in the Artist's Edition Portfolio format. Each page scanned from the original art to match in exacting terms the look and feel of his original art. BW • $29.99 • 8 prints • 12” x 18”
Posted by Alex Sheikman at 7:18 AM 2 comments:

I was going to post some new sketches, but my memory stick "crashed" and I will need to re-scan...in the meanwhile, here is a random page from the upcoming Dark Crystal volume 2. Once that is approved, the page will be scripted, lettered, and colored. 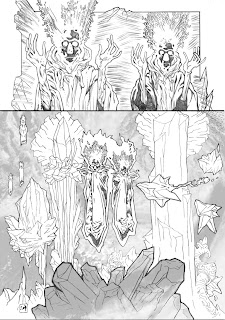 The signing at Merced's Red Sky Comics was great. I got to see some old friends, meet some new fans, and drew sketches pretty much non stop....does not mean I drew a lot of sketches, just means I am real slow :) I was pleasantly surprised to see how many Dark Crystal fans are out there! I got to spend a little bit of time with JH and Wendy Williams and I got to see some of Jim's art work from the upcoming Batwoman #12 and #13...outstanding. I kept telling him that the work deserves to be printed in the same format as IDW's Artist's Edition books. Wonderful art, progressive storytelling, and great "acting" by the characters (that is one of the hardest things to do). So all in all a great day...except I got lost on my way back and ended-up driving through Modesto, Stockton, Tracy, Livermore, and Milpitas before I got back to San Jose. I have just finished looking through the amazon.com website and I pre-ordered a bunch of books! Fantagraphics if putting out a line of books that reprints EC stories grouped by particular artists. They will have a volume devoted to Wally Wood, a volume for Al Willamson (with some stories inked by Frazetta!), and a volume by Jack Davis. How can you NOT pre-order that!?!?!? Other things on pre-order: "Judas Coin" by Walter Simonson "Rio" by Doug Wildey "Woodwork" by Wally Wood "Bible" By Joe Kubert and Nestor Redondo "Genius: Illustrated" by Alex Toth "Green Lantern" By Len Wein and Dave Gibbons On the drawing board: Dark Crystal Volume 2, page 32........... Posted by Alex Sheikman at 7:09 PM No comments: