I have been struggling with the back cover for issue #1. Did I want to print a guest artist? Should I do the cover by myself? What image should I use?

In the end I decided that I was going to do the back cover by myself, and I was going to feature Bronski since he was the main character in the back-up story for that issue. My next question was..how can I do something new and cool that I have not done before?

After a few sketches, this idea of putting Bronski in front of a "wanted: dead or alive" poster worked itself out and I was pretty happy about it. When I was all done I showed it to Norman when he was visiting. I was all jazzed because I thought this was very clever and has never been done before...Norman pointed out that he has seen something similar when he was 9 years old watching "Tom and Jerry" cartoons...oh well. Off it goes to the colorist :) 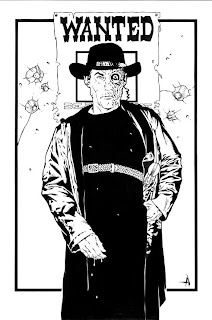 I have started inking the next issue and if all works out as planned I hope to have the next 30 pages done (inked/lettered/scanned) by San Diego Comic Convention...

...penciling another issue and just started inking again. I hope to post a few inked pages in the next week or so. In the mean time, here are two recent reviews for the hardcover collection of the first series:

Posted by Alex Sheikman at 9:35 AM No comments: