Satoshi Kon "Opus" and "Tropic of the Sea"

I'll start out by saying that I am not a huge manga fan. Back in the early 90's I tried reading "Lone Wolf and Cub" because Frank Miller was inspired by that...it was very good, but I liked Frank Miller's interpretation of that more than the original material.

I was blown away when I read "Domu" by Otomo Katsuhiro. Since then, I have also read "Akira" and purchased a few art books by Otomo Katsuhiro. Also, when I was in Japan in late 1990's, I somehow stumbled onto the work of Katsuya Terada and I have been keeping up with his art books and his Monkey King comics. But apart from those two creators I don't really read a lot of manga.

At least that was true until about a month ago when I "discovered" the manga work of Satoshi Kon. WOW!

As I understand it, Otomo Katsuhiro was his artistic mentor and I guess the art style was the first thing that I noticed. I liked the art and thought the story idea behind "Tropic of the Sea" was interesting. Big development firm moving into a small sleepy sea side village and starting to change the way of life. The catch is that the village supposedly has a pack with the mermaids. Will the fisherman be pushed out? Will the economic factors outweigh tradition? Are there really such things as mermaids? 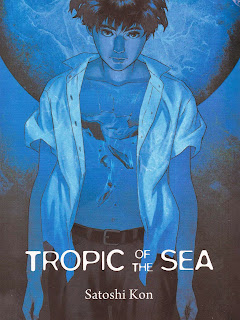 I gave it a try and loved it. As always there were a couple of places in the story, where I felt that there was a cultural factor that I didn't understand, but overall it was an excellent story, beautifully drawn, and wonderfully laid out (I still get chills when I remember those night time scenes in the still waters of the bay).

So I looked for other books and found "Opus", the story of a manga artist who ends up being sucked into his manga and eventually pulls his creations into his own "reality". That was just fantastic (in any sense of the word). The only regret is that the story was never finished...but that is OK.

I have just purchase a 420 page collection of earlier Satoshi Kon's short stories from the 1980's called "Dream Fossil". I am looking forward to start reading it :)
Posted by Alex Sheikman at 8:31 PM No comments:

For the last few months I have been working on a comic book adaptation of "Lost Abbey", a short novella by Jeff Wheeler. The comic book will be a bridge between Muirwood trilogies and apart from the book covers will be the first graphic visualization of the special world that Jeff created in his books. 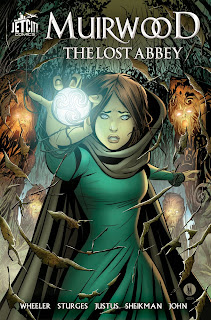 I am working on this project with writers Matt Sturges and David Justus. On the art side of things I am re-united with Lizzy John, who did such brilliant work painting my Dark Crystal pages (as well as the Cave Girl story from Moon Lake).

I am also re-united with editor Paul Morrissey. Paul and I worked together on "Legends of Mouse Guard" #1 as well as a portion of Dark Crystal Vol 2.

I had the pleasure of exchanging e-mails with Jeff Wheeler, who reviews all the artwork, and provides feedback when we don't quite "hit all the notes" just right. I think with Jeff's involvement we will be able to create a graphic novel that will enhance his creations and give his fans a visual treat.

More info as images get released!
Posted by Alex Sheikman at 4:34 PM 1 comment: