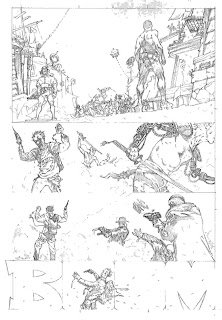 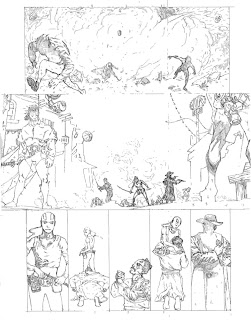 ForeWord- Book Of The Year Award (!!)

Robotika has been selected as one of the finalist for the ForeWord Book Of The Year Awards! I am not sure what the chances of winning are (check out the other finalists!), but it is an honor for me to be included:

I am penciling on this smaller size boards and the pages seem to be moving much faster...a coincidence?
Some random panels from the last few pages: 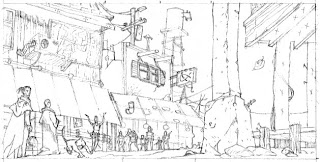 I just wanted to take a moment to mention that I have added a few more links.

I was introduced to Brian Churilla via Leif when Leif moved to Portland. I have already mentioned Brian in an earlier post. Brian is not only a very talented artist, but is also a very charming individual. He has contributed a short Robotika story and a pin-up that will appear in the second series. Brian is also working on a creator owned series titled "The Engineer". I was so impressed with the artwork and the storyline that I recommended the property to Archaia Studios Press and I hope to see "The Engineer" as part of their line-up some time soon.

Brian in turn exposed me to the work of Joe Suitor and Joseph Cross. Mr. Suitor is working on a series "Monoluminant" that will be published by APE Entertainment and Mr. Cross is developing a storyline titled "Kyogen". I am very excited to see both of these series develop and if everything works out to be able to feature some of their work in Robotika :)
Posted by Alex Sheikman at 12:44 PM 1 comment: