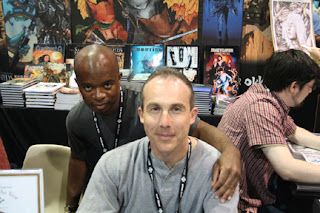 The convention at San Diego is the biggest
convention I have ever been to and it seems to get bigger every year.
This year was pretty amazing for me because I could show off a
collected edition of the firstRobotika mini-series and also preview the first 2 issues from the second Robotika mini-series coming out in December.

The huge news from the convention was that David Petersen, the creator of Mouse Guard, has received
the Russ Manning award. David has had an amazing year and it is
wonderful to see him being recognized for all of his hard work. I had a
great timetalking to David and Julia AND I got to read the first issue of David's second series, which is simply awesome.

I got to met and talk to Ted McKeever and Ron Marz
who have been super supportive of my efforts and were kind enough to
write introductions for the collected edition. I got to spend a few
minutes talking with friends who live too far to see on regular basis.
I did not catch everyone, but I had a great time talking to Ryan, Leif,
and David Moran.

I also got a chance to connect with some folks whom I have only known through e-mail up to his point: Brian Churilla, Jeremy Shephard and his wife Julia, Joe Suitor, Joe Illridge and the whole new ASP crew...it was pretty sweet.

And
the "wow, can this really be" moment of the convention was when I
bumped into David Williams. I met David 12-15 years ago when he was
living in Oakland, since than he has worked for every major comic book
company and every animation studio in US. He also worked as a designer
on a bunch of movies, including the Harry Potter franchise. David is back working at Marvel and he has a sweet sketchbook out.
Posted by Alex Sheikman at 7:28 AM No comments:

I got interviewed at Indie Comic News by Miguel Rodrigues. This was sort of different because instead of doing it by e-mail, Miguel interviewed me over the phone. It is odd to hear my own voice...I sure say "you know" and "well.." a lot. I am not sure if I always made sense, but I tried to give honest answers. 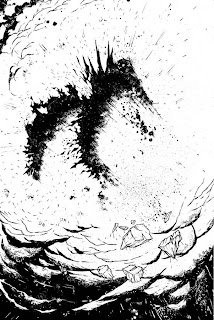 Posted by Alex Sheikman at 7:20 AM No comments: