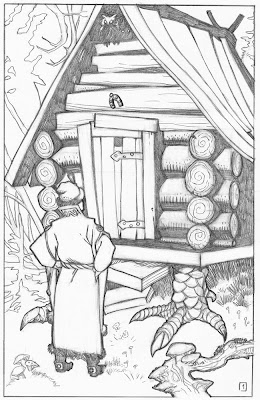 Claire Wendling is a wonderful artist who started in French comics and later on moved on to doing concept fork for films and other commercial illustration.

Last year, Stuart Ng Books published an very nice 40 page collection of Claire's sketches titled "Daisies". It seems that there is now a new edition with the same name published in France. The differences are that the French edition is hardbound AND is 61 pages.

I am very curious about this book and if anyone has any info I would very much appreciate it. At the moment, I am assuming that this is a totally different collection. The reason for my assumption is that Claire Wendling has a history os releasing books with the same name but different content. It is kind of funny, but up to date she has done 2 versions of "Drawers", "Iguana Bay", and "Desk". I find this fascinating because it seems that while everybody else is just repackaging the same material and renaming it to sell more copies, her strategy seems to be to release new material...under the same title.
Posted by Alex Sheikman at 7:37 AM 4 comments: 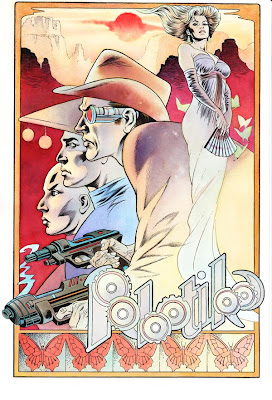 I was very fortunate to meet Sandy Plunkett via internet a few years ago. It was wonderful to be able to express my appreciation for an artist whose work I admired for years. Now, there is a new sketchbook full of his sketches available for everyone to appreciate. You can find it here: "The World of a Wayward Comic Book Artist"
Posted by Alex Sheikman at 8:38 AM 2 comments: 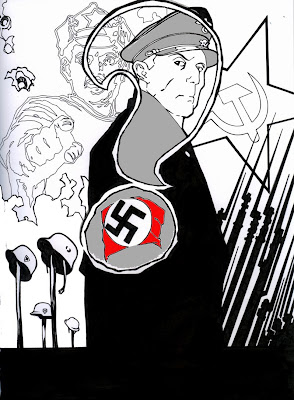 This is a concept drawing for a possible project: 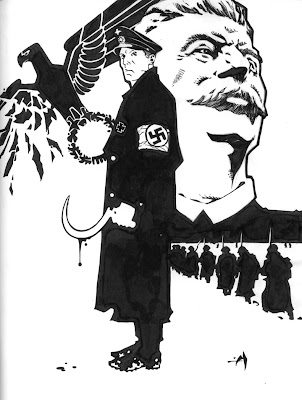 I want to thank everyone who came by on Saturday to say "Hi". Very much enjoyed seeing some old friends and meeting new people...almost makes me think I should do more conventions :)
Posted by Alex Sheikman at 12:52 PM 3 comments:

I will be signing and selling stuff at Hijinx Comics this Saturday. I will be joined by Mick Gray, the inker behind such books as Promethia, Joker, Zatanna...I'll be bringing books for him to sign :) 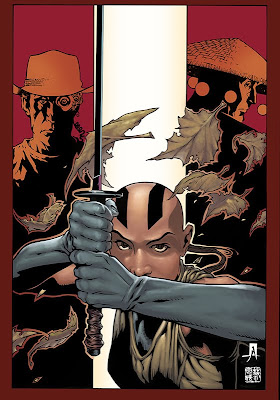 Posted by Alex Sheikman at 10:27 PM No comments: 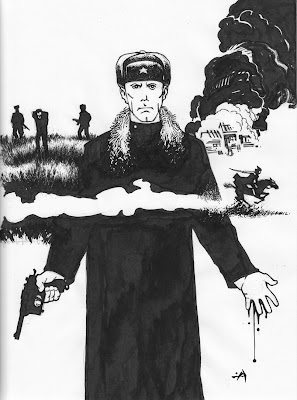 Mouse Guard: Legends of the Guard #1 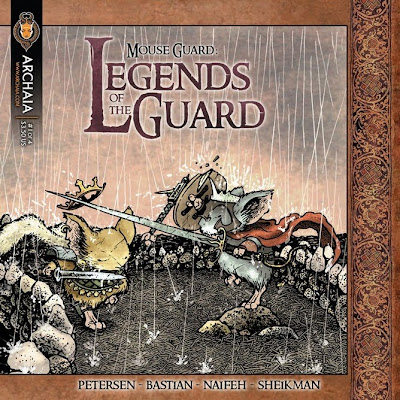 All across the land, Mouse Guard: Legends of the Guard #1 is in the stores....and I have a short story in it :)

David Petersen did a short Q&A with me about my contribution on his blog. You can click "here" to read it. 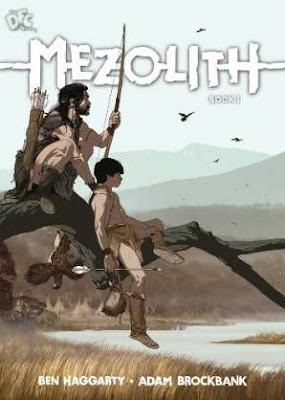 A few weeks ago I purchased a new graphic novel "Mezolith" by Ben Haggarty and Adam Brockbank. The cover caught my eye and I remember thinking: "I bet they got someone to do the great cover and the inside is nothing like it." I was shocked when I realized that the same artist did the interior pages AND it was a gorgeous book. I got it and read it right away. The story is a coming of age epic set in the Stone Age and told through a series of vignettes. Each short story having it's own point that fits into a larger overall theme. And it is, of course, beautifully drawn. 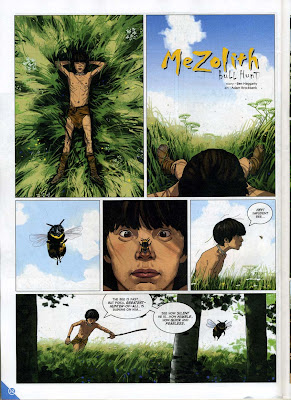 I have never encountered Mr. Brockbank's work before, so I searched the wed and found his "website". It turns out that he has done lots of concept and storyboard work for film and I was real curious as to how a "Hollywood guy" ended-up working on a comic book. So I contacted Mr. Brockbank and he was kind enough to answer a few of my questions that I am posting below.


1) Please say a few words about your “Adventures in Illustration”. Did you go to art school? Who would you site as an inspirational influence? Did you make a clear career choice of working as a concept/storyboard artist or is that something that developed organically by itself?

I grew up in a very Arty household. There was a studio where my Mum painted and my Dad used as a workshop, and my sister and I were encouraged to use it whenever we wanted to as well. Every home should have one! My first comics were the black and white reprints of classic Marvel strips we had in the UK. It was the physical energy that really captured my imagination then, and I copied them like mad, as well as creating my own strips. Later on ( mid - late 70's ) in my early teens I discovered the more mature comics, like' Eerie' and 'Creepy', or' Heavy Metal', and stuff published by 'Dragons dream' etc.

But gradually my infatuation with comics was eclipsed by a growing interest in Painting, and it was in this subject that I graduated, and then went on to do a Masters degree at the Royal College of Art in London in the late 80's. It's very hard to earn a decent living as a painter, so like most young painters I had to find other work to supplement my income, and it was a friend who suggested storyboards. I was quite unaware of what they were or how to get started, but once I tried I found that all that television and all those films I'd daydreamed in front of weren't a complete waste of time, because I had absorbed the language of the camera. I knew instinctively how to frame a scene, and quickly found work storyboarding commercials for production companies.

It was a few years before I found myself on a feature film ( does anybody remember ' The Adventures of Pinnochio' with Martin Landau? ) and not long before an over stretched Art department ( "Lost in Space" ) gave me the chance to try my hand at concepting. Once I'd made the leap from commercials to features, the time left for painting was all but gone.

2) You have done lots of concept illustration and storyboard layouts for motion pictures. You have also worked with panel-to-panel comic book storytelling. What are your thoughts on the differences between how you approach storyboards vs. comic books?

The approach I've taken to MeZolith is of course much influenced by my film work and working methods, which I hope bring a cinematic feel to the strip. Some comic book artists have an exceptionally cinematic technique. Look at Otomo's 'Akira'. Never mind the anime, that comic is SO saturated with the language and energy of cinema.

I would describe the Artistic style of MeZolith as clear line rather than fully painted, with a very naturalistic palette. With painted artwork, you've got to make sure it doesn't slow down the momentum of the story too much. You want to evoke more than describe, and clarity is all important, just as it is with storyboards. With a comic there are the additional disciplines of page composition and economy. By economy I mean you may only have 5 pages to tell a story. You can't go off on a flight of fancy. You need to find the essential framing. As regards page composition, there we have the balancing of frames, emphasis etc. These are factors unique to comics. 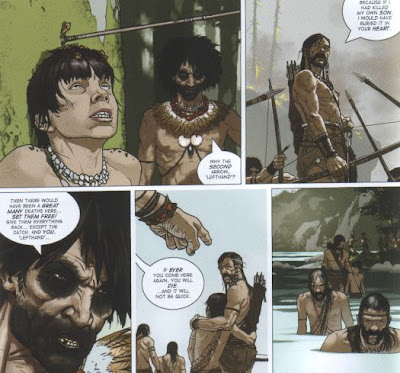 3) How did you get involved with “Mezolith”? Are there plans for a sequel? Are you working on any other projects?

MeZolith began the day David Fickling visited the Art department on 'Harry Potter' on a kind of talent scout for illustrators for his children's comic,' the DFC'. He made a great pitch and I knew it was a unique opportunity. I got in touch with my old and dear friend Ben Haggarty and explained the situation. We could offer them anything, so long as it appealed to the age group the comic was intended for, notably 8 -12 year olds. Ben is a world renowned oral storyteller ( with a secret love of comics! ) and right away we were looking for a framework in which we could embed some ancient folk tales, myths etc. We settled on the Mesolithic era, and the project began to take shape. Lucky for us they loved the concept and MeZolith was born.

There certainly are plans for a sequel, and MeZolith book 1 is going to be published in France too this summer.
I'm not working on other comic book projects actively, but behind the scenes Ben and I have a few ideas we are developing. Hopefully we can get MeZ 2 off the ground first!

For those who are interested and live in US, Mezolith can be ordered through amazon.com here: "Mezolith" 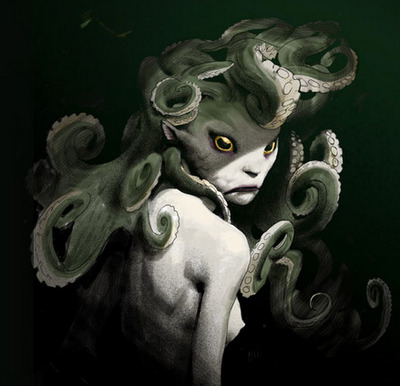 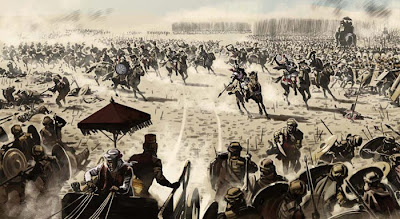