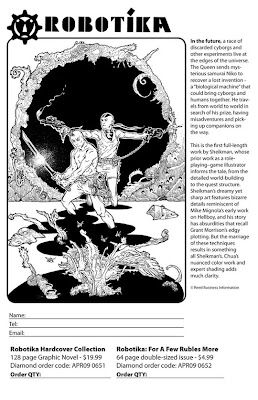 Archaia Studios Press is back...and so is Robotika.

I had the second Robotika mini-series, Robotika: For A Few Rubles More, finished for almost a year, but regretfully the publisher, Archaia, went into restructuring after releasing the very first issue. However, they are back and Robotika is being published again! I just hope that everyone who has enjoyed the series is still interested and will be curious enough to pick-up the new comics.

To relaunch the series, Archaia is printing a double size issue of 64 pages containing the first issue of "For A Few Rubles More", published back in 2008, and 32 new pages of story and art.

For those who are interested in ordering a copy, I (with a lot of help from Dan Foskett) created a "coupon" with the order codes. Just click on the picture above, print the coupon, circle which book you want, take it to your local comic book store and ask them to order a copy for you. That simple :)

For those of you who don't get out to the local comics store, you can order on line from Heavyink.com. Just click on this link:

You get 20% and shipping is a flat fee of 99 cents...so while you're at it get some more comics including this awesome release from Archaia:

Awakening Hardcover Collection
This hardcover collects issues 1-5 of the award nominated Awakening series from Nick Tapalansky and Alex Eckman-Lawn. Wonderful series that Nick has once described as: "a zombie series...that might or might not have zombies in it." Nick originally introduced to me the whole idea of an order "coupon", so go and get Awakening coupon here!

Posted by Alex Sheikman at 9:41 PM

Cool stuff dude. Dig the composition that you've got there. Reminds me of some of the Kelley Jones sketches that he used to do as well. Nice work. congrats on getting the second issue out.

Glad that you have discovered Steranko. there is a gold mine there to look over and absorb as a designer. He really is a better designer than an illustrator, but he and Neal Adams were the two stars of the post-Kirby era and you can learn a ton of lessons from both.

thanks for the nice comments on my inks. I'll be down in san diego as usual and i'll look for the booth if you're going to be there.

i'll be at supercon for one of the two days, so we'll talk then.